Welcome in our office!

The history of Reichman & Rommelaar begins with the return of  Mr Reichman from Indonesia. In 1958 he began an estate agency at the Papegaaienlaan 2. After his death his widow carried on with the estate agency with her brother in law, Mr Rommelaar In 1961 Reichman & Rommelaar were founded, with an office at the van Boetzelaerlaan 13. A year later Van Boetzelaerlaan 7 was bought and used by the estate agency. Mrs Rommelaar, the mother of the actress, singer and artist Wieteke van Dort assisted at the office. Wieteke and her parents , like Mr Reichman, returned to the Netherlands from the Dutch East Indies, medio 1950s. Wieteke was 14.  Since 1958 the family shared the house with the Rommelaar family at the Boetzelaerlaan 13, above the office.

In 1975 the agency is taken over by Mr E.Haan, who sold it to the present owner in 1998. It soon turned out that the space at the Van Boetzelaerlaan was not sufficient. In 2000 there was the possibility to extend as a carpet shop( Van Onderen Tapijt) left the Statenkwartier.  The premises on the corner of the Aert van der Goesstraat  and the Corneliss de Wittlaan was bought by Reichman& Rommelaar. In oktober 2000 the present office was put into service.

The agency has been a member of the NVM since 1961. Reichman & Rommelaar calls himself a traditional ánd modern estate agent. How is this possible? Old fashioned expertise combined with reaction speed and computerization. The agency has an international network in the area. Here customers are at the right place for selling/buying or renting/letting 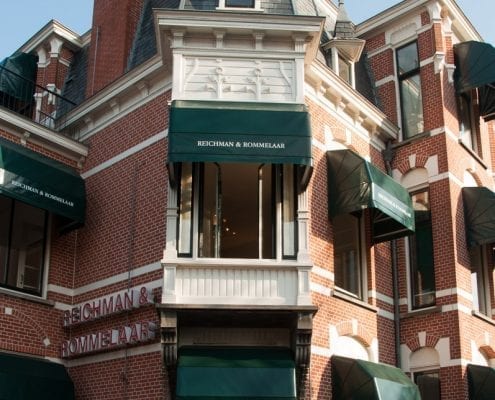