Welcome in our shop!

As soon as you enter Philippe Galerne’s shop, your mouth starts to water. You have arrived at an authentic French patissier.

Philippe Galerne had his training to become a patissier in Paris and Versailles. His brother is a pastry cook in Paris, but Philippe was attracted to the finer work. He married the Dutch Nancy and settled in the Netherlands. Here he entered several national and international competitions in his professional field. In 2006 he opened his shop on the Aert van der Goesstraat. All the hard work has paid off. His products have often received great reviews in the press.

On a Sunday morning there is a lively trade. You would think you were in France. The NRC reporter Janneke Vreugenhil calls his croissants the best in the Hague. Here you can buy éclairs, macarons, brioches, pains au chocolat, tartes au citron, tartlettes and madeleines. The Dutch also love these sweet wares as well as the traditionally baked French bread. On a daily basis Philippe and his assistants bake the tarts in the open kitchen behind the shop, with the fruits of the season, all fresh. They only use seasonal products and contain no additives like fragrances or flavourings. At Philippe Galerne, you won’t find a strawberry tart in winter or an apple pie in summer.

A traditional business but with a vision for innovation. For the last few years Philippe has followed in his brother’s footsteps, little by little,  by baking bread too. The patisserie has evolved into a boulangerie 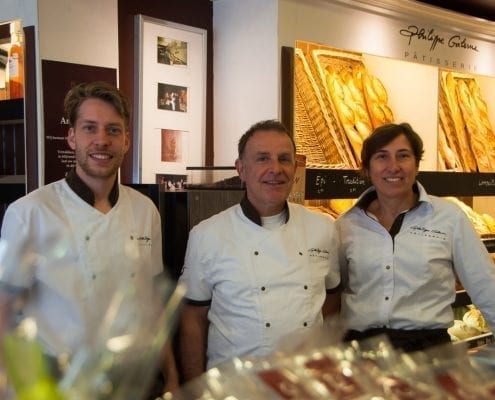