Enjoy them om our terrace!

For almost forty years  Carlo Kragt has been the owner of Dick’s snackcar at the Frederik Hendrikplein, at the edge of the Aert van der Goesstraat. The snack car is a real family business. Carlo’s father began the snack car 18th April 1960. In 1968 Carlo started to work with his father and took over the business in 1978. Now he runs the business with his son André who will take over next year, although Carlo will still be involved.

For almost fifty years Carlo has been at the snack car at the Fred. What could he say about his customers? “The public is very varied: the Dutch people from the neighbourhood and a more and more expats who have discovered the chips”. After all they supply very good products. Carlo and André have many regular customers who they value. “The regular customers provide the bread and butter, the passers-by are the extra topping”.

The days are long. “I open at half past eleven, but I am preparing things at home from half past nine. I get home at night at half past nine, a twelve hour work day. I used to do this six days a week. But even now I still do in three days the same as another person does in a week.. I told my son do not think this is an eight to five job”.

What will the future be for Dick’s snack car?  “The Fred will be renovated next year. On the plans we are situated a bit to the back. The council has no idea yet, what is going to happen exactly. The snack car will have to fit in with the surrounding area. But for now my son will take over and continue. That is certain”. 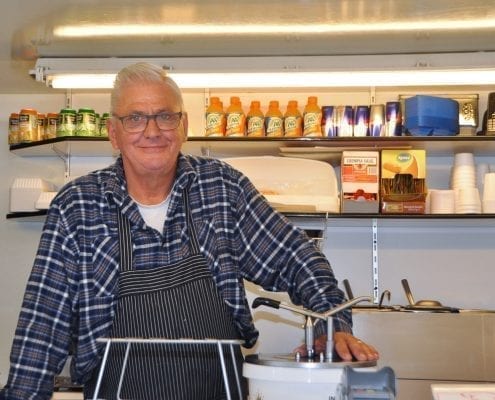